» Getting aid
on budget

Information on aid which is aligned with country budget classifications is a key demand of partner countries. It has been part of the commitments made in Paris, Accra, Busan and Mexico, with a specific indicator measuring the share of aid reported on country budgets. Several assessments of progress since the Paris High-Level Forum on Aid Effectiveness found that data use remains low by partner country governments and civil society actors, in part because the information in its format is not suited to their needs.

CABRI's 2011 Position on Aid Transparency emphasizes this in its first point under "Useful information", stating that "countries require... aid information (especially with regard to off-budget aid) to be classified consistently to align with the country categories and classifications used for budget allocation and accountability processes, irrespective of whether the classification is administrative, programmatic and/or economic. CABRI called again in 2014 for the implementation of this methodology – also called the "budget identifier" – which "bridges the gap between donors' projects and budget classifications used by countries".

Aid transparency... is not just about aid. It goes further, into how that interrelates with all finances of the whole country... It's good for donors to publish what they fund... but along the line, it's all about the impact on the budget. 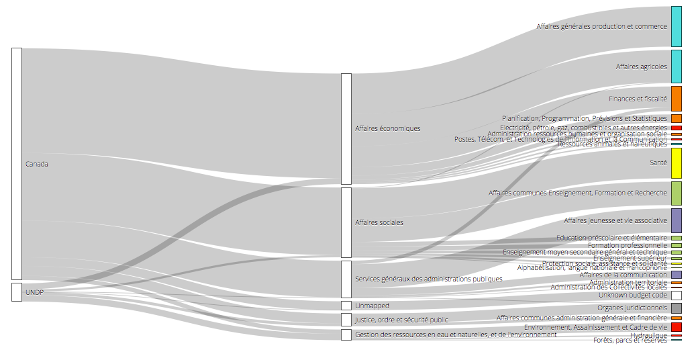 Mapping aid to budget classifications is becoming significantly simpler and possible to undertake automatically, following agreement on a standard methodology for publishing this data. There are two parts to this:

In order to enable mapping to country budget classifications, donors need to publish their data to the IATI Standard, using several features of the standard that allow for granular and detailed data to be provided.

In order to allow IATI data to be mapped to country budget classifications, projects must be coded up correctly, providing sufficient detail about the nature of the activities undertaken. In summary, donors should:

Once the data is available and coded up in classifications consistent with those used in the budget process, countries can choose how they would want to use such data. The data could be included in budget documents, or in the various other stages of the budget proces.

The methodology for mapping aid to country budget classifications is the result of extensive research and consultation, as well as agreement by the IATI Steering Committee and the OECD DAC's Working Party on Development Finance Statistics (WP-STAT).

A series of reports developed the original methdology that the final work is based on. In July 2010, a Working Paper by the Overseas Development Institute, International Budget Partnership, and Publish What You Fund considered the relationship between various international classifications (particularly COFOG and the OECD DAC's CRS) and country-level budget classifications. A subsequent report commisioned by the IATI Steering Committee recommended that donors map to a common codelist, which would then be mapped at country level to country-specific classifications. A further report refined the methodology and tested it against 35-40 country budgets, finding that it was a robust approach to mapping donor data to country budgets.

We conducted a series of country pilots in order to test the methodology and learn lessons around process. To ensure a large enough sample size, we included five donors and five countries, with projects totaling USD 3.5 million.

The full set of data used in this pilot is available to explore and download:

Amounts show % of project value that can be mapped to various budget classifications.
– indicates that the pilot did not attempt to map to this classification.

We presented the work at the following meetings, in order to raise awareness of the work and gain feedback from PFM, budget and AIMS experts, and check that this methodology will help to improve the coverage of aid data in partner countries' budgets.

We presented and discussed this work at the following meetings:

In general, we received very positive feedback on the principle and the methodology of this work. Several questions were raised on the practicality of implementation. The country pilots generally suggested that these concerns could be overcome – the level of effort from donors appeared to be quite low while leading to some big improvements in the amount of aid that could be mapped to partner country budgets.

The work was led by a working group of the IATI Technical Advisory Group (TAG), the IATI TAG Working Group on Aid and Budget Alignment.

Formal proposals were presented to, and approved by, the IATI Steering Committee and the WP-STAT.

If you want to know more, you can get in touch with Mark Brough mark@aidonbudget.org